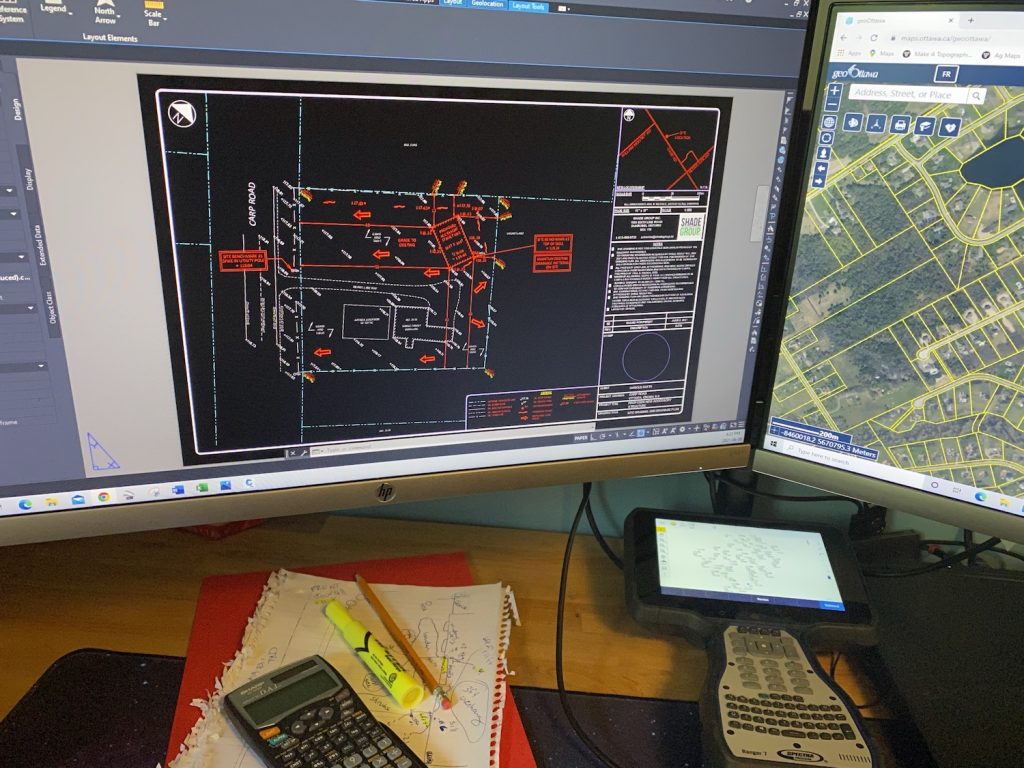 If you're looking to take on any land improvement project or new build; whether it's a new garage or an addition to your house, chances are you'll need a building permit. One common requirement of a building permit is a Grading Plan. Grading Plans are also sometimes referred to as Grading and Drainage Plans or simply Drainage Plans. These plans are typically prepared by a professionally licensed engineer.

We at Nepean General Contractors offer in-house professional services; either as a standalone service or as part of a larger project (e.g. if we were to assist you through the entire process for your new addition or new garage, etc.).

In order to prepare a Grading Plan, we will first require topographic data. This can be supplied by you if you have recently had surveyors on your property - however the data needs to be within the past 1-3 years, and cannot have been collected prior to any changes on your property. Changes may include anything from landscaping to new additions, sheds, garages, etc. Typically, we would recommend getting a new topographic survey for each development project. Please contact us to discuss the specific needs of your project and we will guide you through. 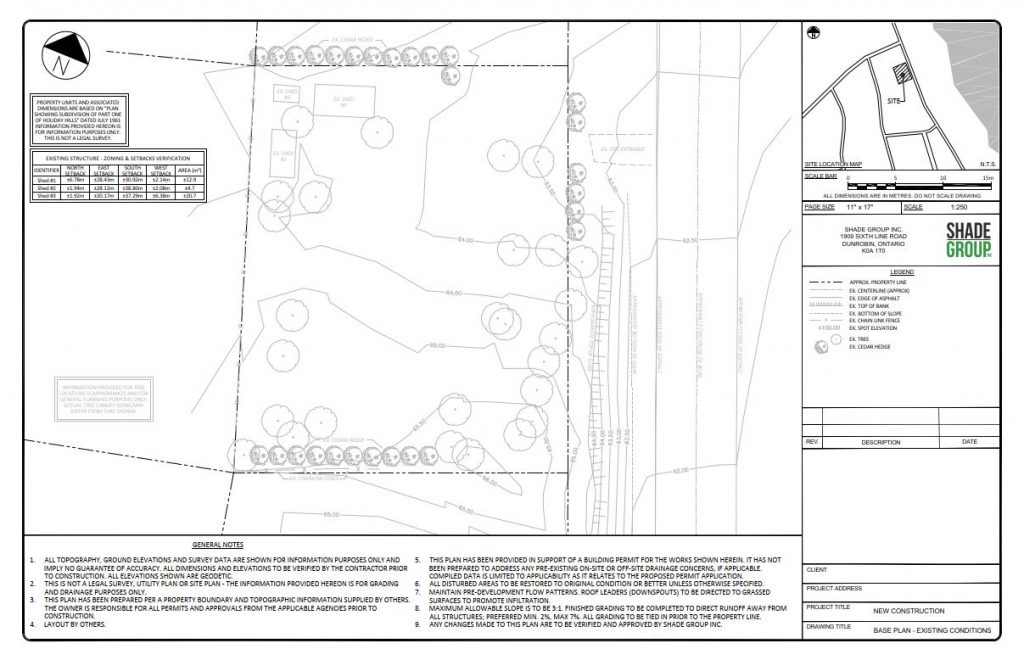 After we have completed the field work, we compile the information back in the office. The data we collected in the field is used to create a linework drawing of the existing site conditions. This will provide the approval agency with a visual of existing structures, retaining walls, etc. These site features, combined with elevation information, paints a picture of how water flows on the property before development.

In cases where a topographic survey has been provided by others, we would still compile a base plan. Often times the plan will include information that is surplus to the project at hand, so our staff begins the project by removing unnecessary data and setting the plan up to best outline the proposed project. 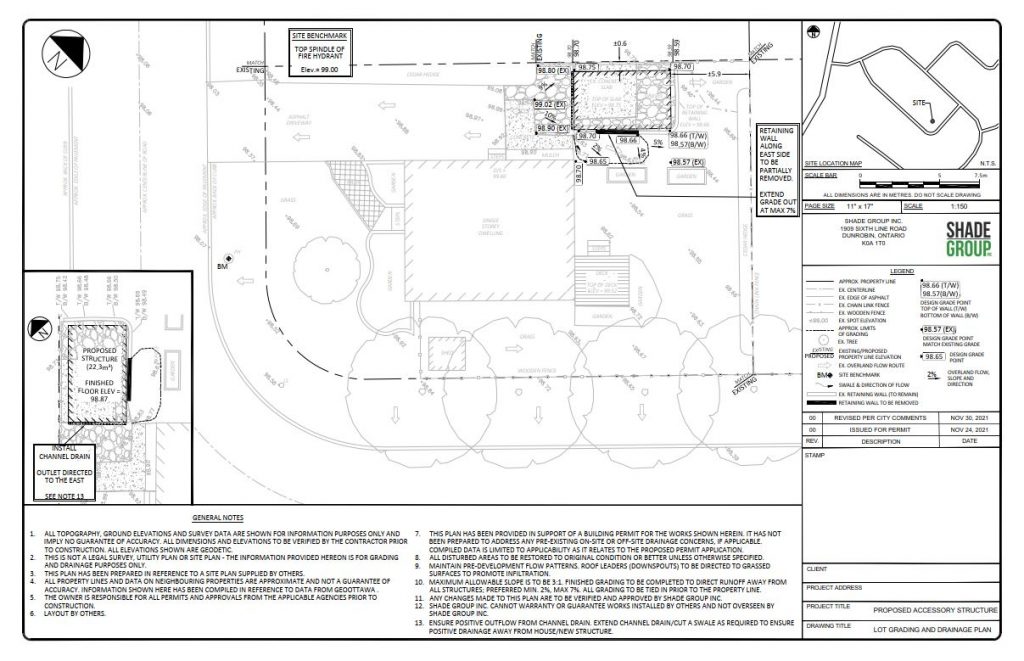 Once the base plan is prepared, we work with you to develop a plan that shows the proposed development; or compile our base plan data with an existing site plan. The final step is including construction details and design elevations on the Grading Plan. These construction details focus primarily on ensuring that the proposed development does not negatively impact either the existing property or the surrounding properties from a grading and drainage perspective. If your property is located within a new subdivision, this may include reviewing the municipality’s approved plans for the subdivision as a whole, to ensure that the proposed project and the grading proposed, does not conflict with the previous approved plan. In subdivisions particularly, cohesion of the properties is important to ensure that the properties work together.

The municipality may also ask for a post-construction or “as-built” plan. This is prepared after the completion of all construction which demonstrates what has actually been built. Similar to a building inspection, where an official comes to check on the project and ensure that what was built matches the plans, an as-built plan can be used to demonstrate that the grades and features proposed have been built as originally approved.

Similar to the preparation of a new plan, an as-built plan will require a field visit to collect topographic data. Alternatively, we can prepare a plan based on information supplied by your contractor. This data would then be compiled with the original approved Grading Plan, and shown as markups on a plan; highlighting any minor or major changes that occurred during construction. Finally, this plan would be submitted to the municipality for their approval and final sign off on your project.

If you have been asked to provide a Grading Plan or As-Built Plan for your project,  please fill out our contact form and we’ll get right back to you. We respond to all inquiries within 24-48 hours - so if you haven't received a response - check your junk mail! 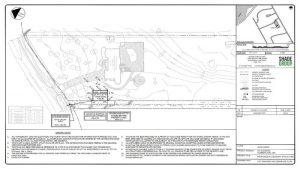 Project Spotlight Nepean General Contractors was contacted by a client in Cumberland about preparing a Grading Plan for ...
Read The Article

Foundation Digging for an Addition in Hintonburg, Ottawa, Ontario 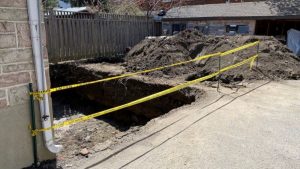 Nepean General Contractors was contacted by a homeowner looking to construct an addition on their existing dwelling in ...
Read The Article 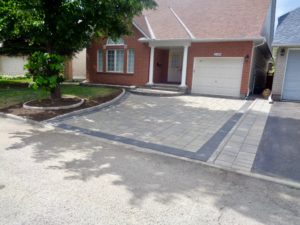 Rainwater is a source of water that everyone has to deal with in the Ottawa area. In many ...
Read The Article 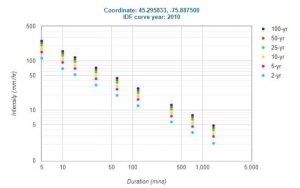 Pictured Above: An Intensity-Duration-Frequency Curve for Kanata, Ontario (http://www.mto.gov.on.ca/IDF_Curves/results_out.shtml?coords=45.295833,-75.887500) If you are ever working with an engineer on ...
Read The Article